Aside
↓ Jump to Comments

Weekend with the family extravaganza

Finally, a chance to sit and write.

I’ve booked for the whole week ahead of me off. Kinda need it, tired of working, working, working. And also felt Zayanino is feeling the effects of his parents working all the time. He’s been getting extra clingy and crying more when we leave him (especially after a weekend when we’re off).

A few days ago, I received my biometric card, confirming my indefinite leave to remain. Alhamdulillah, after all this time, my visa has finally been finalized. What I really, really want is MY PASSPORT!!!!!!!!!!! *screams to the wall*

My lawyer said that I could get the visa ‘soon’ as in maybe in a day or two. BUT NADA PUN!!

I was so so keen. If

If I had my passport before this week, I was so so so tempted to go back even if just for a week.

Laat weekend, we had housewarming/belated bday makan2 over the weekend. Friday – abang krul aka Big Bro 1 and family came over in the morning. With his 3 kids and Zayan, riuh tarus rumah. Zayan was running everywhere with the boys, being taken with their iron man toy. Abd the boys started playing with the bday present they bought him (miniature cars from the cartoon Cars – they went to Disneyland Paris a few days before. So jelly me! I wanna bring Zayan to Disneyland!).

Zayan started hitting the boys (who’s 3 and 5). Like hello Zayan, find ppl your own size. I mean, Zayan, NO HITTING!! *momma firm voice on* Also I think I’ve perfected the whole ‘Mama marah ni, STOP THAT NOW’ stare/glare. Cos he was doing something violent (like attempt to hit kali) and i was across the room. He turned to me and I gave my LOOK. He stopped and stared back and then hugged his victim (hug=sorry according to zayan).

It was more of like an extended makan2 because we ate that evening but the next day, my sis in law Nuzhah and husband and babies and brother in law Mus and jian (his wife) came as well. Panuh rumah! Sudah lah nada sofa (yet).

Basically, its a whole weekend of eating and lounging around and then eating some more cake.

we decided toget blackforest gateau for zayan’s cake as we wanted to get somethig different. Nyaman jua. M was like ‘its SO big’ but we managed to finish more than 3/4 of it by end of the day! Now that’s a sign of good cake … or us just being cake lovers.

Sigh. When the lot left, sunyi tarus rumah. Feels so nice when theres family around. Miss the whole riuh rendah of family around. And yknow you dont have to have proper conversation really with family…..its just nice to have the banter and the company. 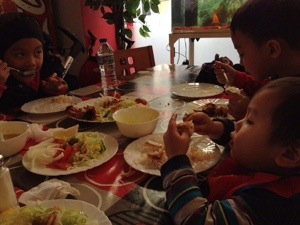 Makan @ Darya (Turkish place) – with the awesomest nasi ayam complete with starter soup, flat bread and choice of veggie – aubergine sauce for me. 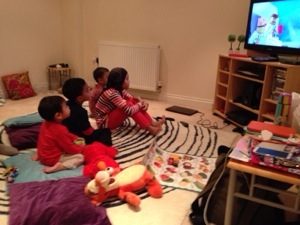 Liat cartoon. Cant remember what it was. 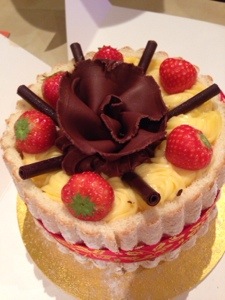 First cake of the weekend – Charlotte Gateau from Patisserie Valerie. Was a light sponge cake with cream and custard and crunchy biscotti at the sides. The kids lapped up the choccies. 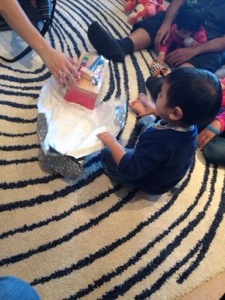 Ya Allah, thank you for giving my kid so many gifts and being loved from so many people. May he continue to have his good health and grow to be a leader of the Ummah and be the coolness of our eyes. Amin.

More piccies of his bday to follow – more arah camera!